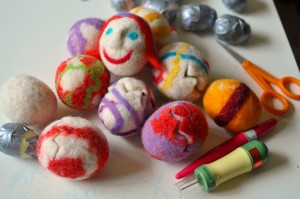 More eggs! I made these with Rebecca last week. We used mini plastic easter eggs as the center, covered in duct tape so they were water tight, wrapped them generously in organic wool roving, (which smelled wonderfully of lanolin), and then added a little colored roving from a juggling ball kit I never made. The color pallet was a little limited, next time/year I’ll get out the Procion dyes and make colors my way. Or maybe we’ll use cabbage and beets and turmeric. Or maybe I’ll have more juggling kit left next year, and I’ll still be lazy. Yah.

We hand felted two of them in a bowl of soapy water, and the rest we made into a nylon sausage and put in with a couple of consecutive loads of laundry. The machine felted ones came out more round than egg shaped, it would be fixable with a little more felting if I wasn’t feeling lazy. I threw them in the dryer too.

Then this morning I cut the eggs out of the middle. I was procrastinating, and really worried that everything would fall apart, but the first one worked! Yay! The rest worked too. This is probably the easy way to make stuffable natural easter eggs, if you have wool roving around. They seem pretty sturdy, and you can make the opening however large you want, as long as it’s big enough to get the egg form out. Pulling those eggs out a minimal hole was a bit disturbingly like giving birth. I’m going to have that as a birth image in August now, aren’t I? Darn.

We used these basic instructions from an AP news article. It was in a bunch of different papers if this particular link breaks, search for “felted wool eggs associated press” and you should find something.

I turned one of them into a little head with some needle felting too. I can’t decide if it’s creepy or not. But hey, I bet they would make good hollow heads for halloween candy! Woo! Creepy hollow heads for candy stuffing, now I know what I’m going to be doing in october. Good thing I have some black dye. Then we can have a shrunken head hunt around the house… that’s going to be fun… heheheheh