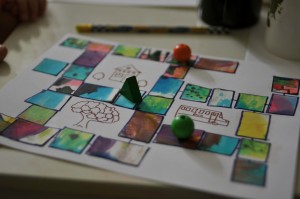 I was tired of the if-I-lose-I’m-not-going-to-play fight, so I needed a new game that you can’t loose. We have a bunch of cut up paintings for glueing, and I glued them in a random strongly connected network. You could draw circles or squares on a piece of paper and draw lines between them, or make them overlap. On our board there were lots of loops, thus lots of ways to get from here to there. (There are pictures inside the loops, but I would leave those out if I was drawing it again, they were just decoration, and distracting.) Get out two game people and another ‘goal’ marker, we used wooden beads and a triangle block. Place them randomly on the board. Each person gets to take turns rolling a die and moving that many spaces whichever direction they want. Whoever gets to the ‘goal’ marker first, the OTHER person gets to put it wherever they want on the board.

It took Rebecca a little while to get the hang of if she wanted to move the triangle, she had to let ME get there first. It’s sort of an anti-racing game.