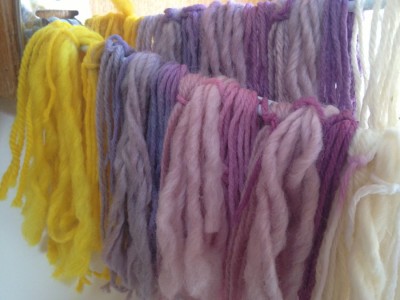 Over the last several months I have been doing natural dye experiment after experiment. I think it’s starting to rub off on Penelope, she’s been doing a lot of ‘experiments’ in the bathroom involving lots of water (everywhere) and soap… My kitchen is alternately taken over by piles of yogurt containers full of plants and then I battle the chaos back again. I’m trying to come up with a good set of plants and fibers that I can put together into a yogurt container one Thursday, and then take out the next Thursday with some reasonable color change, and very little heat. And experimenting and learning a lot too! One thing that I have learned is that mold will turn all of your dyes brown. So I’ve been adding vinegar to my soaks to try to cut down on the mold, which of course turns all the anthocyanin pigment compounds (the pH sensitive color compounds in red cabage and other plants) pink. (Here is a really chemistry intense article on anthocyanins that I need to read rather than skim, someday.) If I add enough salt that should also inhibit bacteria, right? Will baking soda also inhibit bacteria? Which would shift the color of anthocyanin pigments to blue. Interestingly, the black bean water also turned pink so I’m guessing its color is also based on some kind of anthocyanin type compound? Although it is much more light sensitive, so possibly it is just a related compound? Yes, WHFoods.com says black beans have ‘three anthocyanin flavonoids: delphinidin, petunidin, and malvidin’. This is so fascinating, but I am RAMBLING.

In the above plants the back row was soaked with the addition of an iron nail – iron being a mordant that saddens (darkens) colors. But it seems the single nail wasn’t effective enough to do much. Next time MORE NAILS! That’s what experiments are for, right? right! There have been plenty of ‘failures’ (and also giant stinky moldy messes) in my kitchen recently. 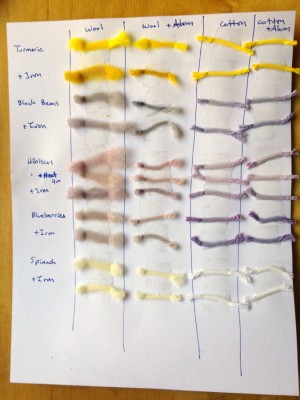 Here is one of the many charts I’ve been making. (If you don’t write it down it didn’t happen. Lab notebooks are important!) The plants from this experiment, which you may or may not be able to read are Turmeric, Black Beans, Hibiscus, Blueberries, and Spinach. Spinach apparently needs heat as it did absolutely nothing in cold water for a week. I was really expecting the wool mordanted in alum to be the winner in color, but either I did a bad job mordanting the wool or I don’t know. I was not expecting the cotton to come out darker, it is supposed to need more complicated mordanting and processing to dye well, and I need to figure out what is going on there. Of course probably just ‘temporary stains’ rather than ‘dyes’ as Paula Burch talks about in her kind of harsh reply to this kids question, but do I care whether it is a stain or a dye? I’m not sure whether or not I do. Something else that I need to figure out. Mostly the point I am trying to get across to the kids is: You can use plants to color fibers, and historically people did. And then we will talk later about Some plants make pretty colors at first, but they don’t last.

The mordanted wool with the hibiscus *should* have formed a permanent(ish) dye. But it is awfully light compared to the cotton. So what is going on? Did putting the wool and cotton in the same dye bath together somehow foil the wool-hibiscus reaction? I am running out of time to answer this question.

But today I’ve learned that the three plants in the middle, Black Beans, Hibiscus and Blueberries all rely on anthocyanins for their color. Here is a fascinating discussion of the color compounds in Hibiscus flowers and how they change color with weather and other factors. Facinating! I think I have learned more really diverse and interesting things preparing for this Arts Focus class over the last year than I have in a long time. New things anyway, rather than incremental understanding of statistics or image processing, or slightly better ways to bind a quilt. Makes me want to unschool. But of course, I am preparing a curriculum. Ironic.

In other news, not that you got this far, I think I’m just going to close my Etsy store, because I haven’t been able to give it enough attention to make it successful these last four(!) years. :-/ And that isn’t going to change any time soon. How did my blog get to be four years old anyway? That is ancient, isn’t it.