It finally happened, Penelope got her own ‘Art Playgroup’. I’ve been feeling guilty that too many of our Friday art projects have been geared for the older kids, while at the same time it’s been harder to engage the older kids so I need to keep it interesting, but I didn’t want to start a second playgroup because I was worried that I would be even more overcommitted. But then I did it anyway. Oh well. In a couple of years when Penelope is in Kindergarden they will probably re-merge, but for now the younger kids are all in morning preschool, so we have ‘early’ art around 1, while the older kids are still in school, and then ‘late’ art around 3:30 when the older kids come home. So far it’s working, and Penelope is thrilled! I will try to keep the same project between the groups, or at least the same materials, to keep from going insane. And since Penelope’s group is much smaller, and Rebecca isn’t there, I have more attention to focus on working with just Penelope so she gets the help she needs with more complicated projects. And she is just so thrilled when she gets to set up for HER art group! Glorious. 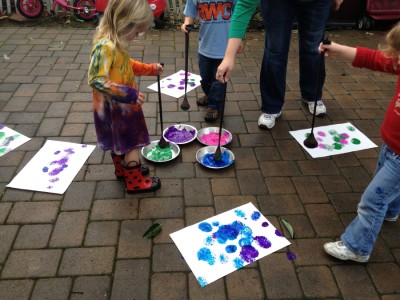 On to the actually interesting parts! Yo-yo painting is such an awesome large motor splatty activity, with such a beautiful outcome. I blogged about it previously here: Yo-Yo Painting – Art Playgroup Friday Given the fun and zero skill required, I chose it to start off Penelope’s playgroup.

You can see the basic idea is to take some knee high nylons, fill the toe with some beans, (you can use rice but I like the large granularity of the beans, bigger is better), knot it so the beans stay in the toe, and then start banging them around, into paint and onto paper.

After your yo-yo has been through several colors the beans inside the stockings retain the colors, and you start to get some lovely multicolored pebbly splats. 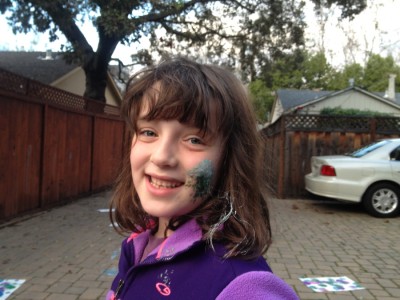 There’s usually at least one kid who is so enthusiastic about the yo-yo-ing and splatting that they get hit. We have several. And you can see from this picture of Ellie that the older kids got handed the same project, and were just as enthusiastic about it. 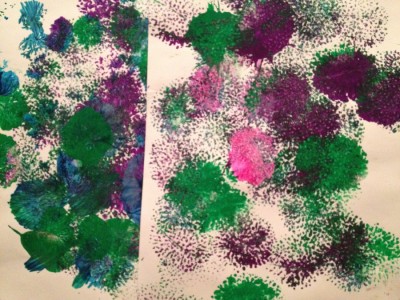 I think that yo-yo painting makes great wrapping paper! This project would be perfect for Fourth of July fireworks pictures too.