I’ve received both of my phonics swaps now, okay, it’s been a week or two, but anyway. And I thought I would take a couple of pictures of my phonics boxes and shelf.

Here is my shelf: 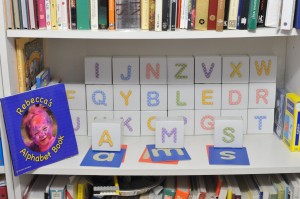 On the left is an alphabet book I made for Rebecca on Lulu.com, by taking pictures of things in our house that start with each of the letters. There is a lot of food for the letters I ran out of ideas. Like J: Jam and Juice and Jars. It is fun to have a book with her stuffed animals in it, but it was a lot of work because I insisted on being a perfectionist about masking out the (mostly white) backgrounds. I should have found a better back drop before I started, I always rush the pre-production and regret it.

I used card stock boxes for each of the letters, rather than Jo’s embroidered pouches, it was a cheap solution. Rebecca picked some sticky chip board letters out at the craft store and she had fun helping me fold up the boxes and sticking the letters down on the tops. Honestly, she’s most interested in these boxes when we get some new things. Then I pull out the right letters and we talk about the things in those letter boxes when we put away the new thing.

Here are the contents of a few of our boxes: 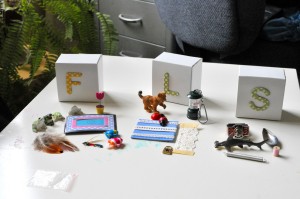 I especially love the four frogs over on the left. I have to confess, when I found these in the antique store I convinced myself that I could give two of them away for the first phonics swap last summer, but in the end I had to keep all four of them. Besides, four frogs. Obviously I should have picked out frogs I *didn’t* like. They had scads of them. But that would have been silly. We just got the fly, and now the fish and frogs can try and catch the fly. Some of the boxes are more fun than others.

The fly came from ittybittylove‘s swap: 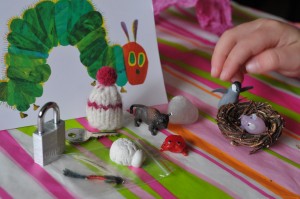 This one was really hard to photograph, because my daughter would not stop stealing the animals and bits. The glass crab and pig, and the penguin were lost for most of a week because she ran off with them and couldn’t remember where she left them. In a pocket as it turns out. Piggy broke an ear and is in the hospital right now. We’ve been having a lot of practice with breaking dolls and fixing them recently.

And then here is Brand New Ending‘s (okay, obviously I can’t make up my mind whether to refer to people by their blog name or their real name. I feel clueless) swap: 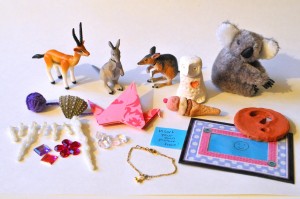 Lots of Australian animals, the plastic ones are fun because some bits move when you move other bits. Er, for example, the bilbo’s head moves when you move his tail up and down. Rebecca also had lots of fun using the question mark as a stencil, and pulling the smily face in and out of the frame like a pop-up book.

Hmm. This post has no end. (And I haven’t forgotten the arm chair pattern. I will get there eventually.)