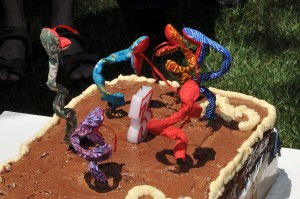 Shortly after Rebecca’s second birthday we got the book “The Monster Show: Everything You Never Knew About Monsters” by Charise Mericle Harper out of the library. Ever since then Rebecca has wanted singing snakes on her three year birthday cake, and we would talk about how it was hard to find the sorts of stores that monsters shopped at to get things like singing snakes. 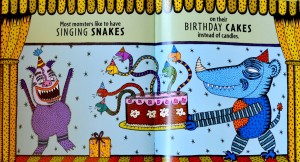 Most monsters like to have singing snakes on their birthday cakes instead of candles.

We had to buy the book when it had to go back to the library. I think she was starting to forget about it, a year later, but I didn’t forget about it. I thought it was a great and suitably crazy idea. Besides, my husband and I had been daydreaming about how to get it to work off and on all year, we had to do something with all that built up creative thought.

We didn’t actually manage the singing part, which is funny, because sticking an iPod with speakers into the box would have been the easy part. But starting with the hard part is always a good idea, right? We did manage spinning snakes. Here’s a YouTube video, proof!

The original plan called for the snakes to be made out of parachute silk and have a straw with air blowing through them for animation, and sound. What we actually ended up with were cotton snakes on bent pipe cleaners that spun around. There are drinking straws lined up with holes in the tinfoil and cardboard base that feed the pipe cleaners through the cake and down to the mechanism, where they are twisted through axle pivot bits, if that makes any sense. You can see a top and side view of the inside mechanism below. The straws mostly kept the pipe cleaners from getting stuck and icky in the cake and frosting, and we only ended up with minimal cake-crumb-rain down into the gears. The pipe cleaners were great for bending the snakes up and giving them different poses. 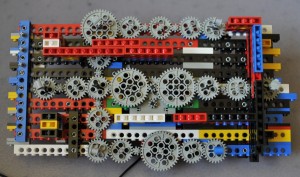 The original gear train that I built powered an ambitious 12 snakes, but the motor was loaded enough with six. Overloaded really, on the test cake on Rebecca’s ‘real’ birthday, two of the snakes failed, and we were only using six of them. So my husband and I rebuilt it to be more robust with less backlash. He’s good at over-engineering things, and I’m good at under-engineering them. (I also got Jesse to build the cardboard base and get all the holes lined up, all the icky here is the top and here is the bottom, please build the middle so that it all fits together magically please work.)

From the side view you can see the feet on the bottom and supports on the top that hold the top of the box, and the cake, up. Part of Jesse’s (necessary) over-engineering of the project, I would have been content with the cardboard box holding everything up, and it probably would have sagged and locked the gears. But it would have worked beautifully for at least 30 seconds. Optimism is not so great in engineering. 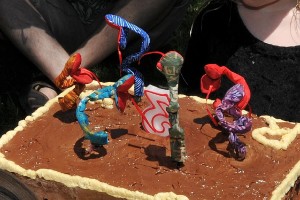 Next year perhaps we will have a wooden box with built in speakers, and party hats for the snakes (I can’t believe I forgot the tiny party hats!) or maybe we will have moved on to something else. I bet a merry-go-round with fairies riding up and down on cupcakes would be pretty cool too…