Many years ago, somewhere upwards of twenty I guess, my grandmother Alison made me a sheep. Or at least I took one of her sheep home with me after visiting, I seem to recall that she had made a whole pile of them. It’s a big pillow sized sheep, good for leaning against, perhaps too thick for sleeping on. (She also made me a six foot tall floppy bunny named Harvey, she could certainly work big when she wanted.) The intervening twenty years have not been kind to it though, and when I got my old stuffed animals out of storage because my daughter wanted a sheep, it was falling apart.

Somewhere along the line it lost its ears, the eyes had been replaced, and I seem to have added an extra nose button, when it had a perfectly good seam nose. Worse than that, all the seams had rotted since it went into storage. All the seams going through the fake fur anyway, which is all of them except the bottoms of the feet and the face seams. (I think it probably had something to do with the nasty gluey substance backing the knit fur fabric.) 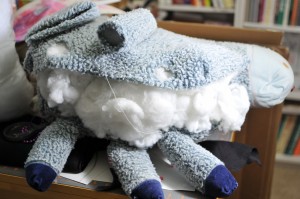 When I first got it out I thought I was only going to have to fix a few seams, but after going through the wash (in a pillow case), with the split seams basted together, it became apparent I was going to have to rip the whole thing apart and re-sew it. Which, frankly, might have been easier than repairing the seams anyway, because I could just turn it inside out and sew it back together on the machine.

Which I did eventually after hand sewing the leg seams back together. I was trying to maintain the delusion that I could get away with fixing only some of the seams, but sewing that fake fur by hand was not much fun, and the whole sheep was coming to bits. Eventually I accepted that if I was giving a toy to a three year old I needed to really fix it, because sturdy is a requirement for stuffed friends.

I made new ears out of a pair of socks from the rag bag, I think they are very stylish! And once the whole sheepy was back together I decided it needed an extra something for the horrors it had been through, and I crocheted a flower chain for its neck. I can’t do a lot about the abraded face, but sheepy is now a functional pillowy friend again. 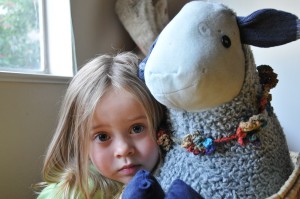 (Rebecca *wanted* to be in that picture, I have no idea what is up with her expression!)

One Response to "Resurrecting Sheep"