There are a lot of fine motor activities going on around our house right now. 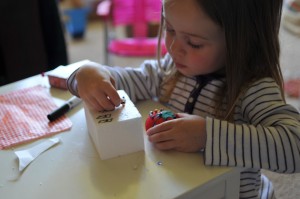 Here is Rebecca taking all the pins out of one of my pin cushions (is it a cute pin cushion, say a cupcake, that I made myself, no, it is a boring old standard tomato thing…) and sticking them all in a line in a block of styrofoam. She found the block of styrofoam, I gave her the pins, she created the activity. When she got tired of sticking the pins in a line we started stringing rubber bands on them to make an instrument. All because when she finds blocks of styrofoam I have to come up with something for her to do with them, otherwise they end up as a pile of styrofoam snow, which since I have a little bit of a plastic phobia I can’t stand! In this case the end was delayed, but not completely averted. 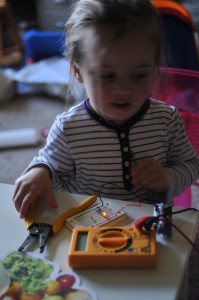 And here is Rebecca wiring up a breadboard to light an LED. You know, I’ve never ever wondered until just now why they were called breadboards, and I’ve been using the things for 20 years. Luckily I have the internet! Apparently early prototyping boards were often bread cutting boards with nails banged into them. Huh. I wonder if someone made that up? Anyway.

Since our house is blessed with plenty of electronic prototyping bits I thought it would be a fun fine motor activity to stick wires into a breadboard, and what to do other than light an LED? I colored on the breadboard first with permanent marker, trying to show by color which of the holes were connected to each other, then talked her through hooking up the resistor, LED, jumper wires and battery. We talked about how there needs to be a circle for electricity to flow, and if you break the circle by pulling out any of the wires the electricity will stop flowing. And we talked about how you can make yourself part of the current circle, and how that can hurt you. And of course even though it’s simple as pie the circuit didn’t work the first time, so we had to debug it with the multimeter, tracking it down to the battery not being all the way in the battery holder. Somewhere in the debugging we got out another resistor, so we also got to see how the LEDs got dimmer with a higher resistance resistor, and she also wanted to light both LEDs we had, so we talked about how they could both be part of the circle in parallel… But she’s three, really it was mostly motivation for supervised sticking of wires into little holes.

One Response to "Pins and Wiring"