At first I thought this activity might be more ‘craft’ than process art, which, it’s fine to do a craft every once in a while, but I do try to stick with ‘here are the materials, lets see what we can do with them’, rather than ‘lets see if we can all make a butterfly with dot markers’. But fairy gardening was very much process. 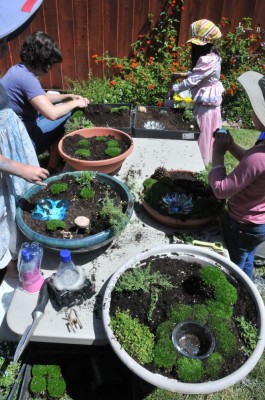 Everyone had some kind of container with dirt, and a flat of mixed fairy-scale plants and a twig chair. 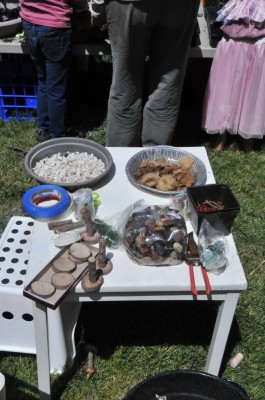 There were also different kinds of rocks, some slices of logs, more twigs, and Renae brought some lovely lichen covered twigs and berries. 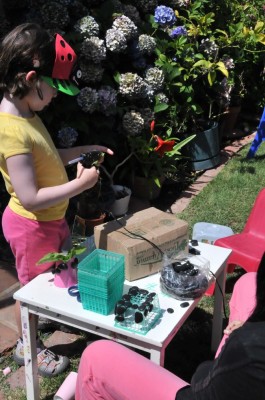 And my recycling bin and a glue gun for general construction. The glue gun was very popular, and I’m thinking that I should get another one, or two! This is Ellie, glueing black rocks in a spiral around her pink paper cup for a fairy house. 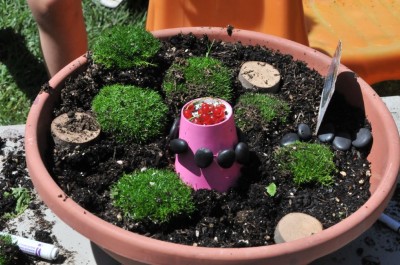 Here you can see the paper cup Ellie was working on, that is featured in the center of her garden, along with a black stone path.

Right now I am really wishing that I had written down a description of their garden from each of them! Because it would be way more interesting than anything I can come up with. 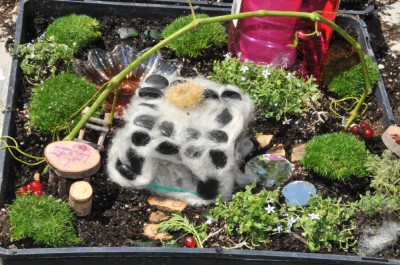 Alina needed markers for her garden. If you look closely you will see that every stepping stone has hearts drawn on it. Also all the tables say ‘I love you’. There are berries sprinkled around for snacking, and a handy cork chair at the table. The house in the center was made by her mom, and the pink house at the back is her creation, made from the bottom half of a pink bubble-blow solution container. There was good recycling this week! 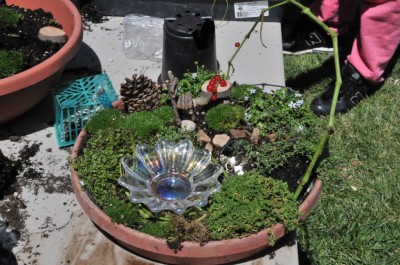 There is a mirror here (Renae brought mirrors too, it’s all coming back slowly!) stood upright for little fairies to admire themselves in. Also she was very firm in arguments with her mother that the fairy bath (I found some bowls at Goodwill), must rest upon a curled up vine pedestal. After some artistic differences Renae split off to work on her own garden. I was supposed to be sharing with my Penelope too, but if you look closely in the first picture you can see a smashed fairy chair just above her head, so instead I got her a plastic bin with a pile of dirt and a shovel, because that’s really what she needed! 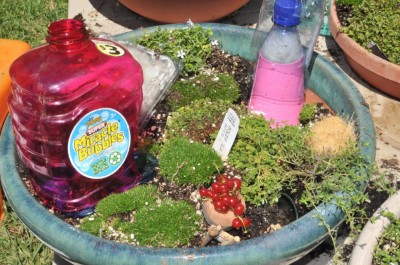 Rebecca’s garden has three structures, an indoor/outdoor pool with a removable ‘Miracle Bubbles!’ roof (she got the top half of the contested pink container), a raspberry container full of wool roving and a fairy tower she assembled from a pink paper cup, wool roving and a cut up water bottle (unusual find in our recycling!) The wool roving was all to make soft nests for the fairies to sleep in, I think she is hoping some will really move in. She also has a standing mirror and a table plentifully supplied with fairy snacks.

Next up, the mom’s gardens! 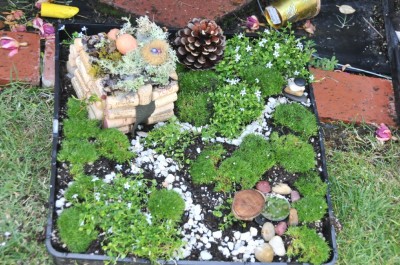 Renae spent quite a while working on her fairy house, made out of wine corks and a lovely collection of lichen and found natural objects. Then when it didn’t really fit into Penelope K’s garden (Yes, we have two Penelope’s now…) added to their other artistic disagreements, Renae moved out into an empty plant flat and scavenged left over plants to decorate it. (Awful photo, sorry! I spent too much time playing then rushed the pictures.) I’ve been told that her fairy garden left the flat and was transplanted into the real garden, where it will hopefully thrive with real fairies. If there are real fairies they are probably at Renae’s house. 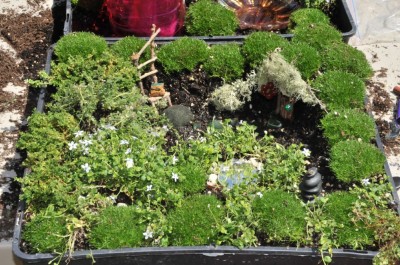 Chris knew from the beginning that she and Ellie were going to need separate gardens! This was a project that the Mom’s were at least as interested in as the girls. 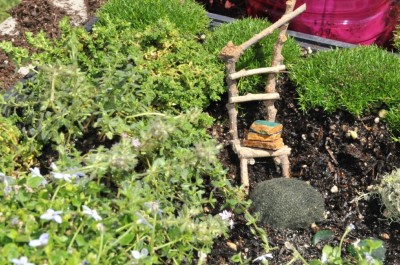 Here is the reading corner, complete with fairy books made out of stones, and an ottoman made from half an avocado pit covered in some wool fabric. 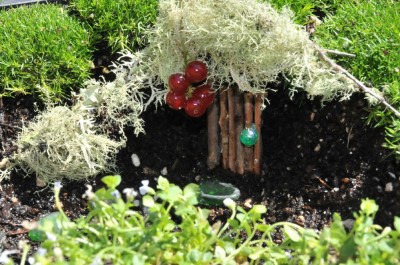 And here is a close up of her totally adorable twig door with overhanging lichen set into a hill side.

It is totally not fair, but I spent a lot more time styling my garden and photographing it over the next several days. It was so much fun! I scattered lantana flowers, picked the dirt out of the moss, staged the furniture… Please come look around! 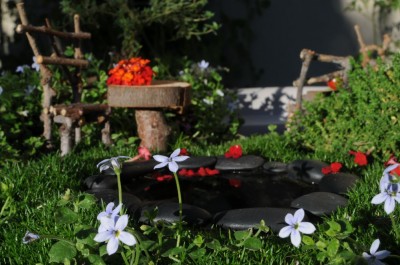 Let’s peek over the edge. Oh, the blue star creeper is blooming! 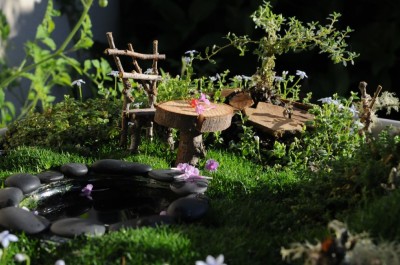 Step up onto the Irish moss carpet, and you can see the thyme tree in the background. If you sit under it I am pretty sure the summer will last forever. (I turned a thyme plant into a ‘tree’ by pruning and braiding six strands. I considered kidnapping one of my husband’s bonsai…) 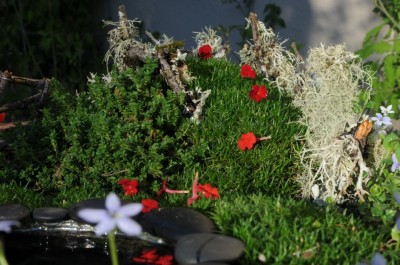 Turn around and you can follow the flower strewn path leading over a mossy hill. 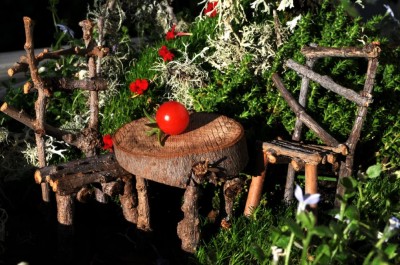 On the other side of the hill is a stone terraced cafe, serving very small cherry tomatoes. I think you can get some flower cups of dew as well. Although there is no house in my garden, I would like to move in anyway! I will sleep in the beds of starry flowers. 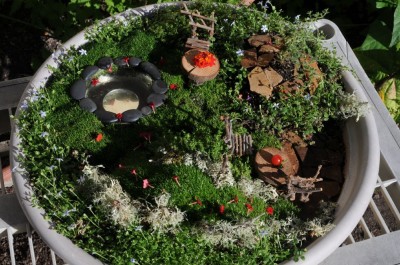 Here is a much less romantic overview shot so you can see how it is laid out. It is small, but it is so much fun to photograph different views! 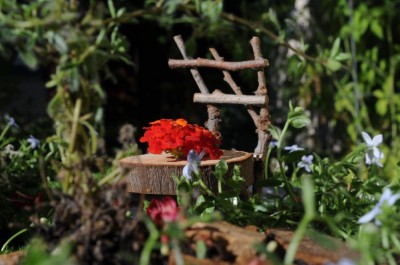 Look over your shoulder as you leave for one last glimpse through the thyme tree of a fairy repast. Goodbye!