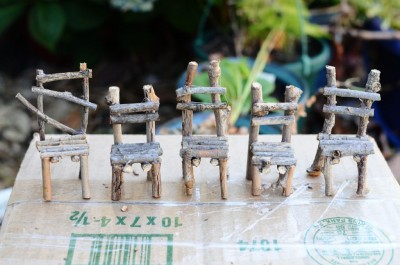 Aren’t these cute? Am I allowed to say that about my own work? I was so thrilled with how they turned out, and how really simple they are to make that I had to photograph the construction of one so that everyone else could have fun making them too. 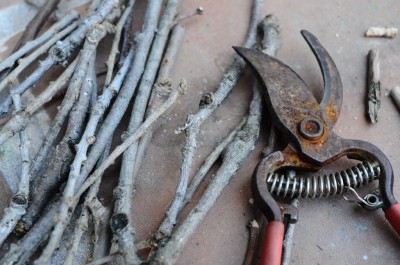 To build these you need some basic supplies, a handful of twigs, pruning shears or other clippers or saws, and a glue gun. It would be nice to make these without glue, I bet they would be really nice with some lashing, but the glue gun makes it so fast! I made six chairs in under an hour, which, given how long it takes me to make most things, is pretty darn fast. Oh seductive glue gun. Also the pruning shears, I’ve done twig work before with a small saw (and 1/2″ twigs instead of 1/4″), and the pruning shears make this SO much faster, snip snip snip and you have three tiny ‘boards’. 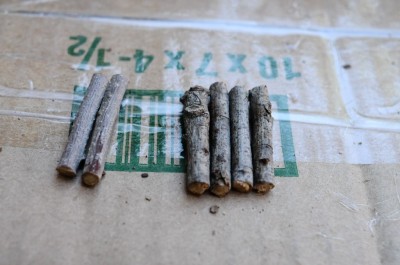 So. To start, find a likely looking stick, and clip six twig sections all the same length, about an inch. Four for the seat and two for the back. 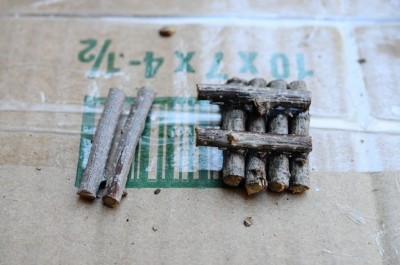 Line up the four twigs for the seat, and cut two more twigs that are one twig width longer than the seat depth. These will be the under-seat supports, we are building the chair upside down. Glue them on about one twig-width in from the edges of the seat. 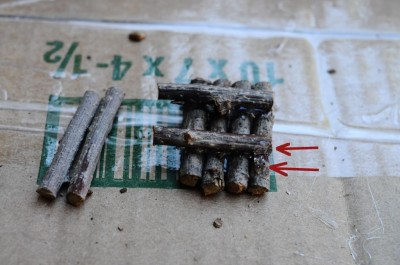 Now for the front legs. Cut two twigs about the same length as the seat twigs, one twig-width shorter is nice. Put two drops of hot glue on the front edge of the chair where the leg will go, one on the bottom of the seat, and one on the outside of the under-seat support. This will give the seat leg glue-support on its top and side and make it much stronger than just glueing it straight onto the bottom of the chair. (Despite my engineering Penelope keeps pulling my chairs apart, no matter your skill, hot glue and twigs do not stand up to a two year old!) 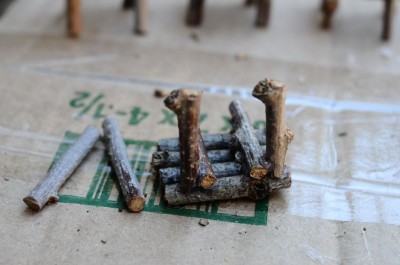 Stick those front legs on. You can see here how the front leg is supported at its top and side. 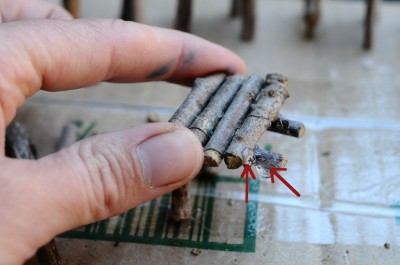 Flip the chair right side up and measure how long you want your back leg/chair back twigs to be and cut two of them. You can use straight twigs, or forky interesting ones. Put two drops of hot glue on for each leg, one on the back edge of the chair, and one on the side of the under-seat support, again, glue on two sides of the leg is better than one! 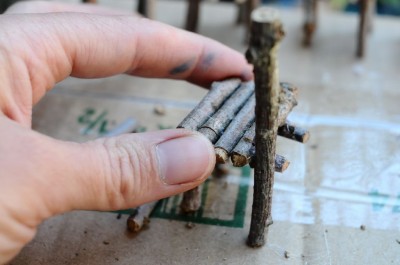 Here is the first back leg in position. When you hold the chair on its feet like this it is easy to slide the back leg to just the right height to make the chair seat level. Holding all the legs against a flat surface as you glue the back legs on will keep your chair from being wobbly like an annoying cafe table. 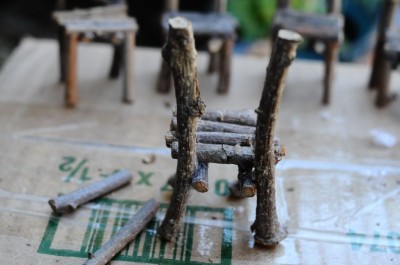 And here is the chair from behind with both back legs glued on. 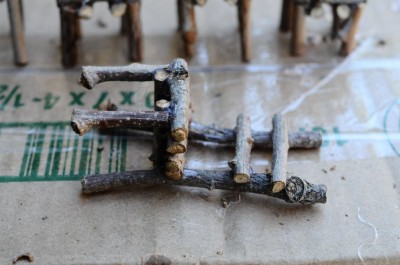 Lay your chair on its back and glue on the previously cut seat back twigs.

And you are done! 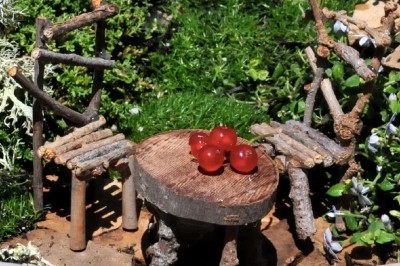 Next up, we make fairy gardens.