I’m working on something, I know where I wanted it to go, but I don’t know where it’s actually going… And my goals might have gotten lost somewhere. I wanted to print some little dolls that would be fun, and very easy to sew. That’s pretty much it. And fun to play with. To give Rebecca, and anyone else, an extremely accessible sewing activity. 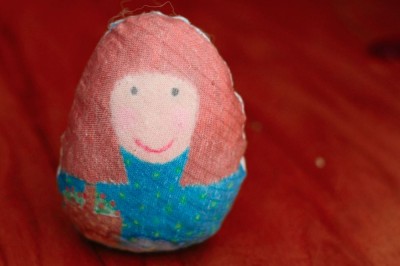 So this is one of my egg dolls. She is cut on the bias to try to make her more plump and eggy with only two pieces of fabric. She is stuffed very firmly, not sure how ‘easy’ that is though, and has rice in the bottom so that she will stand up if you set her down firmly enough. So possibly not fun, and too hard. I need to see how she looks if I give one to Rebecca to sew and stuff. 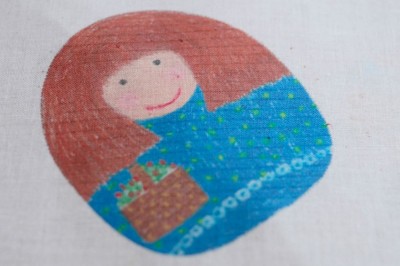 My prototyping was a bit of a comedy of errors, only not as funny. I bought waxed paper rather than freezer paper to iron on to my fabric to send it through the printer (because I am cheap.) Needless to say it didn’t work at all. But what DID work which you might like to know, was to spray-starch the heck out of the sheet of fabric, mutter incantations about how it’s only a $40 printer, and send it through the printer. Anyway, it worked the 4th time. It jammed the first three. I remember there was a trick to it, I’m sure I’ll be painfully rediscovering it next time because I seem to have completely forgotten! Oops. Because I’ve gotten distracted by the textile exploration class I’m supposed to be teaching at Rebecca’s class. About things like weaving and spinning and felting and dying. I’m good with dying, okay with weaving though I’m still working on some of the terminology, fine with felting, I was going to say I know nothing about spinning, but hey, I learned yesterday! And it was really fun! So today I spent a couple hours at the playground with my drop spindle. I have a lot more to learn before I can teach this stuff to K-5th though! So, basically, the egg project is doomed. Like the two patterns I thought would be finished by the end of the summer. Doooooooooooooomed! Maybe that should be the theme of my Halloween decorating? Half finished projects grave yard. Too depressing. Dooooooooom! What a great word.