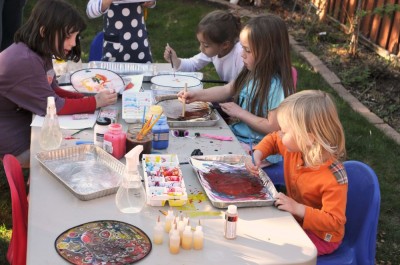 I’ve never painted silk before, and we was planning on doing it for Arts Focus, so I wanted a bit of a preview. (Before failing spectacularly with 25 kids I try to fail spectacularly with 3-6!) And fail I did, at least in my eyes if not theirs. We painted on our gutta – if you are familiar with glue-batik, this is the glue. It forms walls that the liquid watercolor like silk dyes won’t pass. So far so good. We waited for it to dry, some more patiently than others. We painted on the dye, and it did. not. flow. I got out the water spray bottles, and it sorta flowed. Because I hadn’t bought dye, I had bought Dye-Na-Flow silk paint, and the part of the advertising copy where it says ‘flows like dye’? Not so much. It is a highly pigmented and watered down acrylic paint, and that is what it acted like. It left a thin plastic layer on top of the silk, which after it dries you can scrub off like paint. Maybe it would have behaved a little better if I had heat set it like one of our members did, but I was lost at the ‘doesn’t flow’ point. 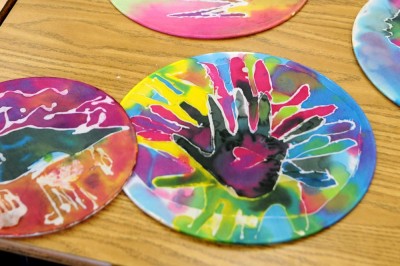 Look at this brilliant piece by one of my students. In class we used Jaquard Green Label dyes, also from Dharma Trading (who I love, they are so nice), which amazingly enough acted like DYES! Shocking. I had avoided the dyes because you have to either steam them or use a chemical fixer to set them, and I didn’t want to set up a steamer (ironing is apparently insufficient) and try to keep things as non-toxic as possible and I was a little unsure about the fixer. But in class given our furious schedule, and the fact that we had already inherited the fixer, after hours of research the night before that was the route I took. And it wasn’t a disaster! Yay! We did the gutta the week before, so I had sets of 8 kids coming and painting their silk hoops, putting them over in the drying rack and going at them with a hair dryer, painting dyeset on with a brush, and then putting it back in the rack to dry. Then I waited a few minutes, rinsed them and set them to soak in a tub, to get the gutta off, while the next set of kids started in on the painting. (We had three projects going round-robin.) Luckily since it was the last session of Arts Focus everyone went to see the Performing Arts group’s performance for the last half hour, and I just had time to scrub and dry everything. I could have sent them home with resist on their work, but I wasn’t sure that they would get finished, and they were so beautiful with the lumpy gutta scrubbed off it was worth the extra work.

What did I learn? Acrylic paint is not dye. I can be such a sucker.

If you have older kids I really recommend trying out the Jaquard starter set (water based!), with some scarves or pre-stretched hoops, it is such an amazingly beautiful project! Even if you just draw some squares and circles together, the way the colors fill in the shapes and shine is just gorgeous. We used these dyes on an unstretched scarf too, just painted them on with no resist (that student had missed the previous class) and that was beautiful too. I think next time we need presents for the grandmothers we are going to get out silk painting and scarves.