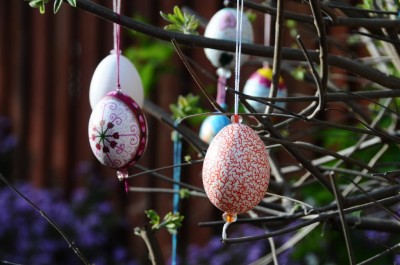 For Art Group the Friday before Easter we drew on blown eggs with sharpies. It was a lovely project, and worked for everyone 3 year olds to moms. I was inspired by Gingerbread Snowflakes Faux Pysanky.

The very first thing we did was blow eggs, let them dry, then cover the inside with Mod Podge, which we learned about from Aunt Peaches: How to Make Hollow Eggs Last Ten Years. We didn’t cover the outside with Mod Podge until after drawing on them. I found if we did it at the beginning the Mod Podge would get on the sharpies and clog them up, maybe I was just imagining it, but it seemed to work better if we left the outer Mod Podge coating until the end. 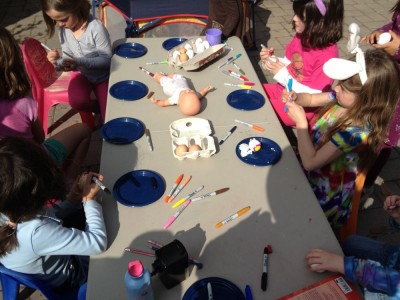 The eggs were all dry and waiting when all the girls came over to draw. We had scads of eggs, everyone helped to blow them, and 33 colorful sharpies. We even had 33 colorful sharpies when we cleaned up at the end, bonus! I gave each of them a plate to set their egg on when they weren’t holding it, to keep them from rolling off the table. And when you have this many absent minded girls reaching for sharpies, that is going to happen. It did anyway, a few times, luckily the inner coating of Mod Podge was enough to protect against a short fall onto concrete. We did have one dramatic egg shatter, when Alara squeezed a little too tightly. Everyone else learned from her tears! And none of the 3-4 year olds broke their eggs, thank you Mod Podge and Aunt Peaches! 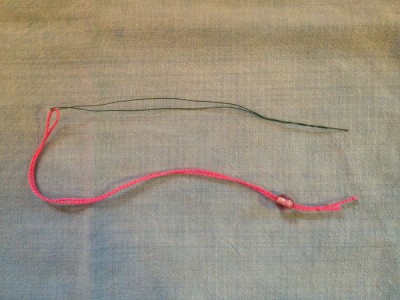 After drawing on the eggs we strung them up. To make the loops and we used pearl cotton (I think), beads and florists wire. 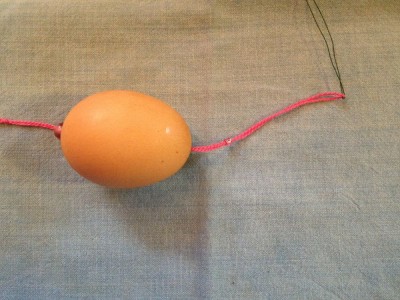 Double over the pearl cotton and knot it, string on a bead, string on your egg, string on another bead, and then you can unfold the florists wire and pull it out, leaving your loop out the top of the egg. If your hole in the top of the egg is especially small, stringing the egg on can be tricky. I found that if I held the egg right up to my eye I could see to guide the florist wire out of even tiny holes. But it took practice and patience. 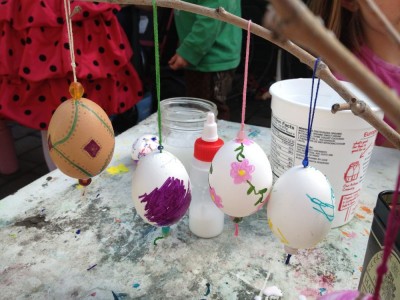 Tie one more knot, and you have a hanging ornament. 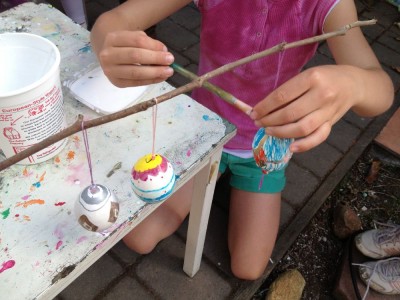 Then, lower string, beads and all, we coated the outside of the eggs with watered down Mod Podge. If you were being fancy you might rest the eggs on skewers to do the outer coat before stringing it, so as to not get drippy Mod Podge all over your lower bead and string, but the Mod Podge on the beads didn’t bother me, it just gave them a frosted look to match the egg. And the work flow for the kids was much simpler, their project just needed to dry at the end, and not in the middle. 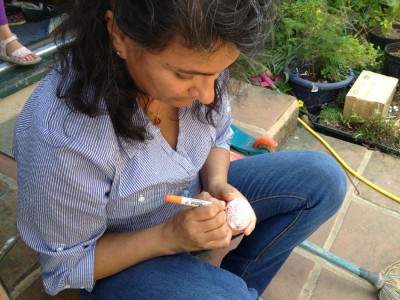 So now I’m sick of blowing eggs, but also so glad that everyone got into the project. And it was a good chance to talk about symmetry and how repeated patterns can make things attractive.

6 Responses to "Sharpies and Blown Eggs"