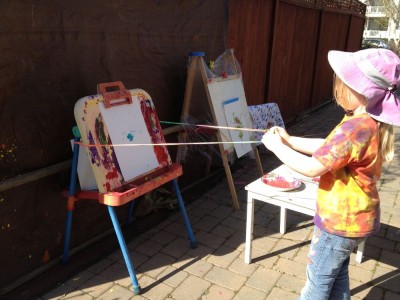 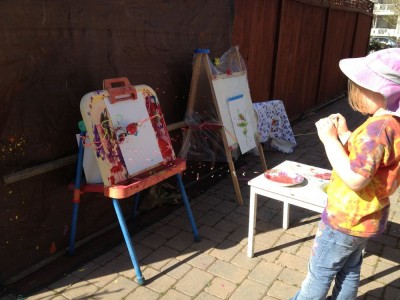 We have done snap painting before, but this time we wanted to do it bigger. Following Teacher Tom’s lead (Snap Painting: Not Killed, But Tamed) we bought some Chinese jump ropes and got out our easels. 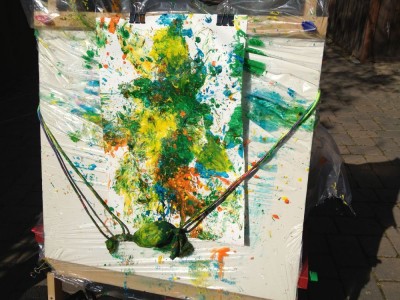 We ended up with smaller Chinese jump ropes than he used, it seems from the pictures, so we ended up putting ours together a bit differently. I doubled over the elastic ropes, tied the ends to an upright on the easels, and the middle to one end of a knee-high stuffed with nylon netting, then the same on the other side. 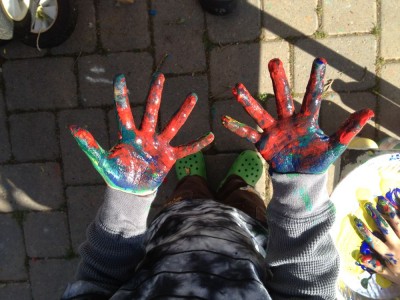 We had quite a bit of fun, and because you could stand so far away when snapping you didn’t even really get splattered. At some point things did devolve to finger painting for some, but I think almost everyone had at least one go with snapping, including the adults! It was a good bit of fun! It was also quite loud, at the first snap most of the 3 year olds jumped, and observed, ‘That was scary!’. But they still wanted to try. 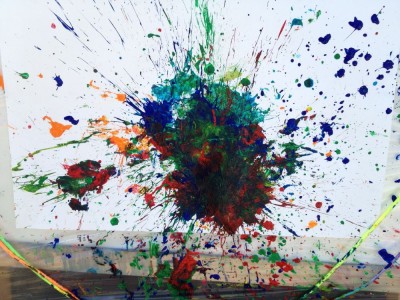 I’m not sure it should be called snap painting with the nylon blobs though, more like splat painting! I think this activity would be fun to pair with The Big Orange Splot, and you could talk about what you see of your dreams in the splots that you make, like reading tea leaves or clouds.

But that would involve sitting down and talking about things in a coherent manner at Art Group, which typically is not what happens!