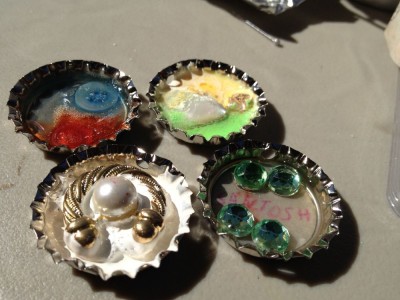 We were walking through Michaels (for Just One Thing of course) and Penelope saw a package of bottle caps and declared that we NEEDED them. Well, okay.

I thought we were going to have to punch holes with a nail or invest in a fancy metal hole punch, but then I saw that these bottle caps were actually pre-drilled, bonus! Of course that means you can only fill them 1/3 of the way with melty plastic, but whatever. 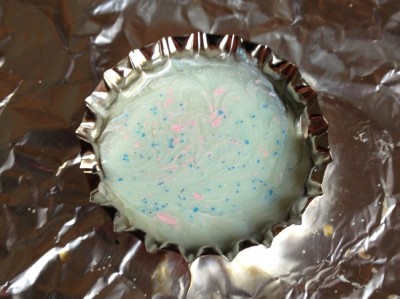 So after we had acquired these desirable bottle caps we had to figure out what to do with them. Lots of experimenting, woo! We started by investing in some Ultra Thick Embossing Enamel, which is a fancy name for melty plastic sand, and used a 50% off coupon at JoAnn’s to get a set of colored embossing powders. I was hoping that we could sort of swirl and marble them into the clear plastic after it had all melted together, but it seemed like the colored powders were only colored on the outside, and the inside of every grain was white, so if you swirl them after they melt everything turns mostly white. (Seen above.) I know it makes them cheaper, the pigment is the expensive part of paints, but still, boo! So the result is if you want mix-y colors it works better if you mix them before melting. And if you heat them for too long the pigmented layer melts off and you end up with white again. But you can sprinkle more powder on while it is still hot and get new colors. I had to keep re-melting and sprinkling and playing for a while. (I cannot explain why someone who is as chemically sensitive as I am has been spending so much time melting different kinds of plastics over the last few months. Inexplicable.) 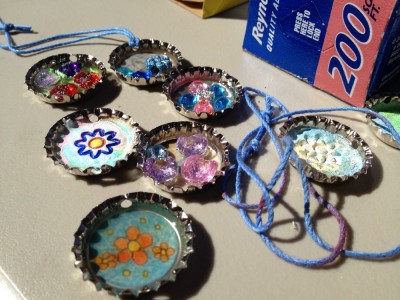 See the blue flower? One thing that did work was stamping the embossing enamel while it was still warm and squishy. Then we could color in the cracks with permanent marker.

Just next to that (in all directions actually) you can see what happens if you melt plastic jewels for too long, the stresses from molding are released and they curl into funny moon shapes. None of the kids cared though, and melting plastic jewels was the most popular option among all the kids.

Down at the bottom you can see that we also experimented with drawing on little circles of paper with colored pencils. That worked all right, except the plastic somehow soaked into the paper and made it look transparent like it had been soaked in oil. I was surprised, as I have a hard time envisioning plastic soaking into paper, but I guess plastic is just polymerized oil? And when you melt it it acts like oil? I have no idea. Makes me wonder if you could use this as a sculptural technique, soaking paper in melted plastic, before or after bending it into paper sculptures? Probably a lot like soaking it in white glue or Mod Podge, which are also both plastics. Sorry, I got distracted!

Not all the buttons and jewels melted, when we buried them in powder it took longer to melt the powder and everything got hotter, when we added just a thin layer of powder it melted fast enough that we could keep the jewels from melting if we kept an eye on things. We also threw some seashells in. I pulled all sorts of things out of the art closet. No one used any sequins or glass beads though, and I can’t remember what else was on the table.

One thing we didn’t try, that I think would be fun, is to mix colored sand in with the embossing enamel, that wouldn’t turn white and you could swirl it around. Of course the dye might melt off the sand, or diffuse, obviously we need to do this again! In the parallel universe where I somehow need to suffocate myself with more melting plastic of course. But then I am a tinkerer, I am compelled to tinker until I get it. 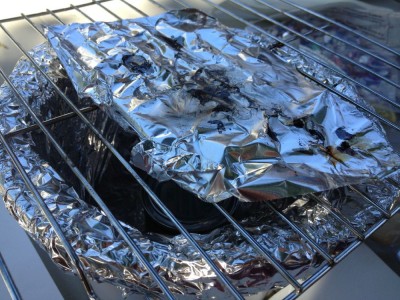 How did we melt all these things outside in our driveway? My first try was with a heatgun, because that is what everyone uses to melt embossing powder. Except their embossing powder is held down with glue. Without glue it was a disaster as you can imagine.

I ended up taking a crockpot liner, covering it with tinfoil to protect it from melting plastic, and put some old sterno in the bottom. Then I put a cooling rack and some more tinfoil over part of the top. It worked great, although I think we went through the sterno faster than we would have if it hadn’t been enclosed and perhaps overheated. More of a camp stove setup might have worked better, or just putting the cooling rack and tinfoil up on legs somehow.

Rebecca wants to do shrinky dinks in the park again, but this time it is going to be in the evening, so we will have to come up with something other than a solar oven, probably something more like this or a camp stove, possibly using lamp oil. It’ll be fun to figure out. Also, more tinkering with melting plastic! Ha.