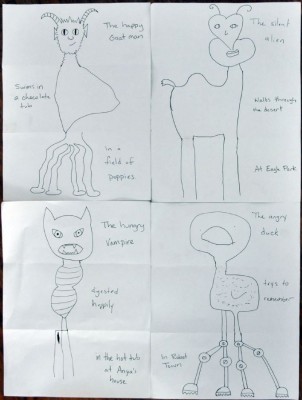 This project didn’t really fly with the kids, partly because of who came that week, and partly because I was too tired to care to convince anyone to try it. We have a population of kids who will try any art project, thus drawing in the other kids, most of whom don’t want to be left out, but if none of them show up, then the project better have some splashy examples, or they will race right by it for secret club. Rebecca is one of the latter, which leads me to wondering many days why exactly I go to the extra work.

I actually thought the project would be compelling, because it is very silly, and if there is one thing that they are all consumed by, being mostly 6-7 year old girls, it is being silly! But of course it has to be silly on their terms. Actually, I should try this again for family game night. Then I think it will hold its own, and it wouldn’t be the first time that Rebecca has reintroduced a lesson much more successfully than I did the first time!

And of course, it is more of a game anyway. The rules are simple, the paper is folded in thirds, the first person draws a head, and a name phrase, (The sad vampire, the fish, the wobbly ghost, etc). When they are done they fold the paper, and then extend only the lines of the neck down to the middle section of the paper, to give the second person a starting point while keeping the head a secret. The second person draws the body, and a phrase about what the creature is doing (walks happily, sways rhythmically, stomps) and extends lines indicating where to put the lower part of the body, then folds the paper over to hide the top two sections. The last person draws legs or a tail or some other form of locomotion, and adds a location phrase (in the desert, at the park, in robot town). Thinking about it, perhaps the action phrase should go with the tail section? There are many versions of this, and the writing can be left off altogether, it is the most confusing part to organize.

My favorite was Penelope’s ‘Angry Duck’, which someone took home as an example, but I have it immortalized here thankfully. She was the only child to participate, and in fact played twice, with two separate sets of adults. So someone other than me thought it was fun. (^_^)

One Response to "Head, Body, Tail"