I’ve been much too busy recently, trying to find time for my ‘real’ job, the one I get paid for to work occasionally, and also trying to finish Jo’s phonics swap. Which I did at the last minute today, squeaking into my post office ten minutes before it closed. Sort of like how I joined the swap, two days late, luckily scoring another late mom, Schelle, for a swap partner, and then Anne of itty bitty love took pity on me and added me as an extra swap partner. Lucky me! In the mean time I’d agreed to do 15 items with Schelle since we only had one partner, and we did a full-disclosure swap so we didn’t get any items we already had, that made it trickier too.

My plan going into these is always that I will make three of everything so I have one for my daughter too, but I fell behind a little bit on this one. We’ll see if I manage to go back and make it up.

Here are the things that I made, rather than bought: 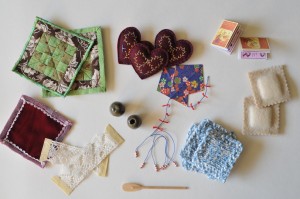 Tiny quilts with 1/2″ patches, one of them with an ‘I’m lazy’ experimental zigzag stitch for binding and one with an honest binding (I hate binding quilts, it is by far my least favorite part.) My daughter did the packing, deciding which of paired objects went to the little boy, and which went to the school, that’s almost as good as rolling dice, right? I think these came out pretty well. They are pushing up against the 10cm size limit though, perhaps I should have done smaller.

Wool felt embroidered hearts, for H, but they could go for E for embroidery too. This is something that I can work on while walking down the sidewalk following a two year old on a tricycle. That’s one of the great things about tiny hand sewing projects.

Books. I got the pdf for these from the Internet Archive, ‘Funny Alphabet’ which is a great source, they have other ancient alphabet books there too. After getting the pdf I spent two hours swearing at pdf munging tools and my printer, trying to get the pages properly interleaved and duplex printing lining them up right. And here I thought it would be simple… I have vague memories of creating a tiny Alice in Wonderland book, I still have it, the book is real, about one inch tall, the creation process is vague, but I think the main difference was I started from text, and used postscript and nup rather than pdfs… and a ‘real’ duplex printer. But enough about that. They came out alright in the end.

Then there’s velvet for V, which I hemmed with lace, I’m not sure I really like how that came out, it’s a bit crooked and fussy, and plain cotton lace for L, both of which Schelle vetoed because she had plenty already. Maybe Anne does too, but we didn’t exchange item lists for vetoes. And okay, I didn’t really make the lace, I just put tape on the ends. Last swap I made little lace boards with three different kinds of lace, but I decided that having a larger single piece of lace you could see through was more tactile and satisfying.

Olives, I think this is the right Montessori phoneme for O, I have trouble with remembering which vowel sound is the primary one, I need to print out a list. Like for I you are ‘supposed’ to use the short ‘I’ sound like ‘in’, not the long ‘I’ sound in ‘ice’. Are they all the short vowels? My phonics partners in the past haven’t been too picky, and I probably need to take another look at my boxes, because that can make it confusing to mix the sounds. I suppose I should separate them out and make long vowel boxes too? I am obviously not Montessori trained like Anne and Jo.

Anyway, the olives I made out of fimo, and they were the perfect olive color before I baked them and they darkened.

And then I did a bad job using ModPodge to make them glossy, (I used a coarse brush and they came out quite ridged), before spraying them with acrylic glaze which sort-of fixed things. Maybe these fall in the un-lovely plastic category. Most of the time I’m so crunchy, and then I find myself baking fimo in the kitchen, thinking, what am I doing. And then I go and sand it, which is worse, but at least I was doing wet-sanding, that helps a lot with the not breathing poison thing.

Moving on to the kites for K. They are just paper around cardstock, with embroidery floss tails. Turns out Schelle was going to make me a kite too, so we both dropped that, but Anne still got one. Rebecca really likes these, so I’m not sad we have an extra. I found one outside on the sidewalk, so we may not have two for long. I need to get these things into her phonics boxes before she plays them to death.

Ravioli for R, felted acrylic with cotton batting filling. You’ve seen this before.

Washcloths for W, I knitted these out of striped cotton, another following the tricycle craft. The first one I knit on bamboo size 0 needles, which was no fun, because they kept bending rather than doing what I wanted, probably because the yarn was too heavy for them. The second two were knit on size 3 metal needles and there was far less hair pulling. They are hardly any bigger either, because of the weight of the yarn. Perhaps washcloths should be terry cloth in the modern world, but I like these.

Jump ropes for J, these are super tiny, made with pearl cotton and seed beads for the handles. I glued the knots so they would stay. I wasn’t sure these would read as jump ropes, but a friend of mine thought they were perfect so I have more faith now. I hope they don’t get too tangled.

And last, an oar, for O. I got the idea to make this from going through my years (99-03 I think) of Dollhouse Miniatures, otherwise it never would have occurred to me. This one is a long O and fills one of Schelle’s vetoed spots, so I only made one.

I did buy a few things too, and a few things I had left over from buying sets or getting duplicates from the first phonics swap, a tiny terra cotta pot, spring, switch, rolling pin, lady bugs and paper umbrellas. Oh, and a 50 yen coin. Mostly for Schelle’s 5 extra spots. (I’m sorry I meant to stick a yen coin as an extra in your package Anne, but I forgot!)

Things I meant to make but didn’t, pillows, underwear, masks, a house… other things on my list, a leaf in contact paper, a diaper, ornament (but that is a long O again), a chain… Once I get my phonics swaps in the mail I’ll see where the low spots in my alphabet are, and prioritize those for making. Schelle was great about targeting the list of my weak letters that I gave her, and I half did too, so now I have to see if any of them have turned into strong points.

I’m rambling. Anyway, maybe at some point I will be able to claim that I’ve crafted the whole alphabet.