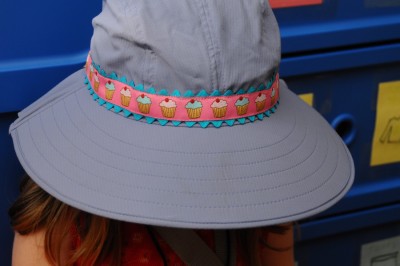 Back in September we all had excellent hat habits. I could get Rebecca to wear her hat whenever we were at the playground, or outside at school, because that was what we did. People would ask me how I did it. I started really young. But then we lost her hat. Being certain that it would turn up again, I waited. And waited. I looked at buying new hats, but the Sunday Afternoons hats no longer had cute flower ribbons around them, and the cute style that used to get so many ‘where did you get that hat?’ questions was nowhere to be found. Why do styles change every year? Why when I find the perfect pair of pants, when I need a new pair the next year are they gone? Why? The only thing that stays the same from year to year are men’s jeans, and I’m done with that phase in my wardrobe!

So what to do? Pick the best hat and add the cute ribbon. Rebecca’s hat, with the cupcake trim, was the first, and the easiest. The rick rack was large and easily positioned against the ribbon. (I sewed the rick rack to the top and bottom edges of the ribbon, then sewed the assembly to the hat.) 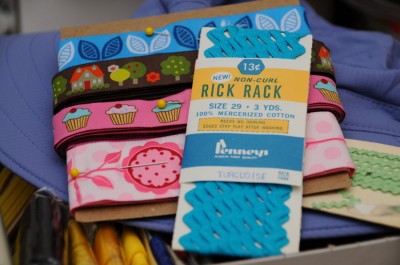 Digression. Isn’t this vintage rick rack package awesome? We’ve started going to estate sales, and I get to ravage the 70yo craft supplies. 100% cotton rick rack? I guess you can buy it online, but it sure isn’t at the local Jo-Ann’s. Estate sales are the best for picking up trim, buttons, and sewing machine feet for pennies. When you can find a good one, but that’s half the fun, right? If I go to too many more though, I’m going to fall pray to the desire to start collecting antique tea cups, and I do not need to start collecting anything else! ‘But the children could use them for tea parties!’ This is how the rationalizations start… Nevermind that Penelope just managed to break one of Rebecca’s more solid ceramic toy tea saucers by dropping it a mere two feet onto the wood floor. (Oh the tears…) I’m sure the porcelain would last minutes around here… 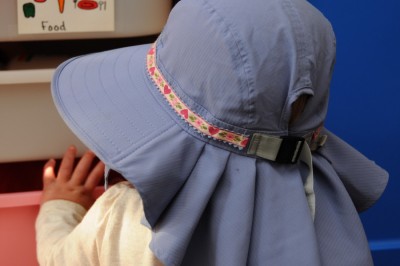 But back to hats. When I picked the ribbon for Penelope’s hat out of my stash I wanted to use the same rick rack so they would match, but her ribbon was just too fine. It called for baby rick rack. Oh there was swearing. I sewed it on once and it was wobbly. I ripped it out and tried again. No luck. I tried sewing the rick rack to the top and bottom of silk tape and sewing to the ribbon to the center of that. Awful. I chucked that one out, I couldn’t bear all the ripping I was going to have to do. The fourth time I resigned myself to sewing the rick rack to the ribbon by hand. Most of the swearing was due to this being a night-before-solstice kind of project. I forgot to mention that, didn’t I? I did not get to my hat until at least a month later. 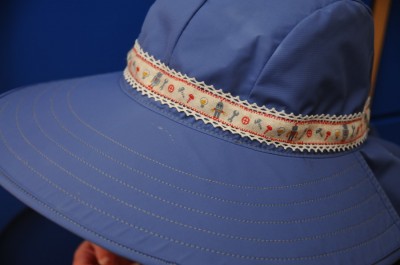 I remembered my lesson though, and since I was using some of my beloved Kokka Robot tape I just skipped straight to the hand sewing step. Basting really. Then I added a red zig-zag stitch at the top and bottom edges of the tape. I agonized about that, I felt that there wasn’t enough contrast between the linen tape and white lace, but the red zig-zag sort of obscures the robots cute little red feet and antenna’s. Agonized. Yes I can be a neurotic spaz! But now, now I have a froofy lavendar Sunday Afternoons hat with ROBOTS. Lace and robots are awesome.

Now we just need to get our hat habbits back. Mine are good, but I’m struggling not to write Rebecca off. These hats, although they are cute, have very wide brims, the better to screen your nose from the wicked sun my dear… But they really do cut down on the kid’s range of vision. Especially Penelope, when I put this hat on her she cranes her head so far back to look up at me she falls over. We live in California though, so we can’t be bad at sunscreen and hats, one or the other tops… Cute as the hats may be, I think it’s time to start practicing sunscreen instead. :-/