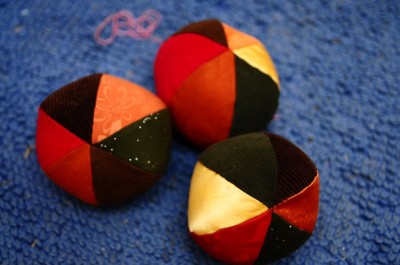 So… the picture could be better. This is a pre-no-brain-because-I-am-designing-curriculum project, harking back to my texture book tutorial but in 3D! Ooooh! (I am tired.) I used red, orange, yellow, brown and green, and I tried to arrange it (without actually buying any fabric) so that there were two textures for each color and at least two colors for each texture, if that makes any sense. So there was brown suede and brown corduroy, as well as green and red corduroy. It is fascinating! (pretend I’m one) There is this one silky texture in two different colors! And this one color, comes in two other different textures! And it goes around in circles! The patterns! Mind boggling! Clearly I need to go to bed.

In other news, I survived my spinning class yesterday. It went pretty well, there were a couple of kinders and first graders who needed more hands on help than I could give them, but really everyone managed it, in the end I think there was just one kinder who refused outright to spin, and one first grader who in the end had to hold the end of his wool up while I gave his drop spindle a few mighty spins and we twisted up the whole (3′) length at once. Sometimes you just need to move on to the next project. Out of 23 though, that’s not too bad, I think that means I made my 90% success goal. (We used this method if you’re curious.) It also means that there were several kinders who with a few minutes of personal attention actually did manage to successfully use a drop spindle with pre-drafted combed top. I learned it’s not actually called roving, unless it has some twist. But I need to be further educated there. So many new words! Diz, hackle, noil, long draw, short draw, rolag, woolen vs worsted, drafting, combed top, roving, sliver (rhymes with diver!?) so many words! If you are curious there is a lot of great information about spinning at the Joy of Handspinning. But like the snap of fingers, now I am on to weaving, because that is what I am teaching *next* week. I am learning SO much teaching this class! And weaving, it is so cool! Go read/watch this introduction to backstrap weaving! Now I want to make a backstrap loom, but my living room is currently full of a bajillion different table looms from school that I have to figure out and warp, so I don’t think I’m going to be doing that! At least, not this week.