Tonight I opened the wrong photo catalog, 2010, but there was tons of stuff in there I never got around to blogging about, like the nifty piñata that Jesse and I made for Penelope’s 1st (and Yash’s 2nd) birthday. 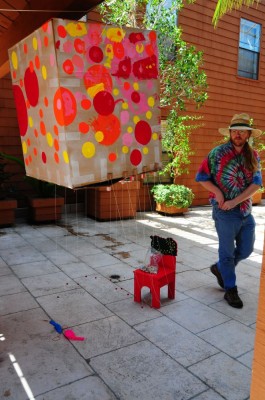 You don’t hit it, but it is full of good stuff. It’s related to those string pulling piñatas that don’t work very well, the hole at the bottom is never big enough, so after the kids pull the string and the bottom pops open, a few sad pieces of candy fall out and a grownup has to shake shake shake to get the rest out. SAD! 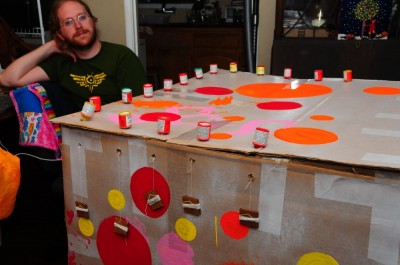 Not here, we engineered the whole bottom to hinge open. And it had to be enormous and make lots of noise and mayhem. So we used a dozen and half party poppers (so everyone would get one) to hold the bottom shut. This is the bottom, you can imagine how when the strings are pulled they detach from the party poppers and unlatch the bottom. Gives a satisfying smell of gun powder too! We should have put the poppers on the side rather than the bottom though, so the confetti would have shot outwards rather than down, but we weren’t sure it would hold the bottom shut as well. 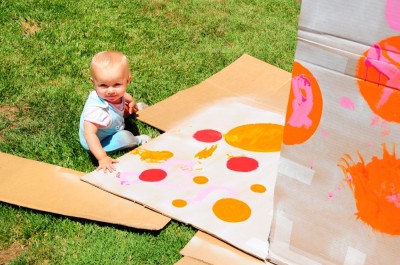 And of course we had to paint it. The theme of the party was ‘balls’, so we painted the box with circles and filled it with balls. Penelope is only 1 year here!!

And the release video (the audio is kind of sad):

The only snag was we fully set it up too early, and the strings all got tangled up, so we had to sort them out before we could have our piñata. We should have unrolled them as we were handing them out. Lessons for next time, (and more gun powder!) of course next time turned out to be a candy catapult. Learned some lessons on that one too!

What is the coolest piñata or candy-dispersal-device you have made or seen?