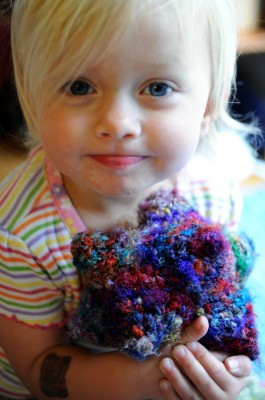 What does stellated mean? It means pull on the center of every face on your polyhedron turning it into a pyramid. Yay! We learned something! This was such a neat brainless pattern (free over here) to work on in meetings. Which is to say I didn’t follow the pattern very well, used yarn that was much thicker than suggested and generally randomly tromped around my dodecahedron, and it still came out quite fun. At least Penelope thought so. And it gave me something to do rather than stab my eyes out at another wasted hour of my life. I need another crochet or knitting project to take to school meetings now. I feel less guilty crocheting than sewing for some reason, because I am not the only one doing it and it is culturally accepted as a brainless hand filling activity? Also there are fewer things to forget and no pieces to drop. I was spinning at our last general meeting, that works too, although there was more staring at the crazy lady. Stellated, your word of the day.