Making felt balls can be tricky for little kids. The hard part is the center ball, rolling the puffy wool up tightly is tricky, and then it usually turns into more of a pac man than a ball after they roll it around in their hands to felt it. Granted the problems disappear when you wrap on and felt a second layer, but some kids are getting frustrated by that point. 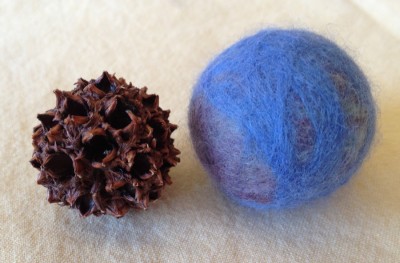 I’ve wondered for a while if you could use the prickly balls from sweetgum trees as scaffolding for felt balls, and you can! So I may try that with my class next year. Just take a dry sweetgum ball, and wrap wool roving around it, dipping it in soapy water to make it damp, continue wrapping and dipping until the prickles stop poking you, and then start rolling it in your hands to felt.

The prickles do a great job of catching the wool and making it easy to wrap. But, they are prickly! So I will have to get some opinions from some young friends about whether it is an overall win?

I read somewhere that (in China?) sweetgum seed pods are called something along the line of 1000 open beaks. But now I can’t find it! Has anyone heard something like that? Wikipedia says ‘all roads open’, but I am *sure* someone calls it something about lots of bird beaks. Which if you look closely at one, is quite disturbing!