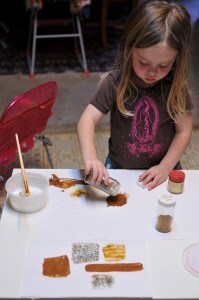 I got this idea from MaryAnn Kohl’s Math Arts, although I think the math connection is pretty weak it sounded like fun from a sensory perspective. The version in the book was more involved, but what we did was paint with glue and then sprinkle spices over the glue. Then there was a lot of spice layering, and then we were making ‘mudge’ according to Rebecca. Mudge being a paste of white glue and aromatic spices apparently. Although I was not deemed competent to make mudge, maybe someday if I practiced enough, but I was just making spudge. Which was fine with me. I don’t care what you call an art activity if it lasts for almost two hours, which this did!

So find those five year old spices in the back of your pantry, put them in jars with shaker tops if they aren’t already, and some paint brushes and watered down white glue. It may look like, uh, awful, but it smells really nice. Ours is hanging on the kitchen wall for Rebecca to sniff. I think we’ll do this with our artfriends on Friday. 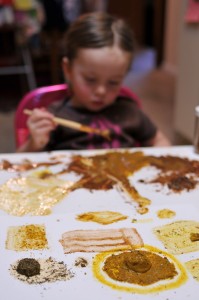