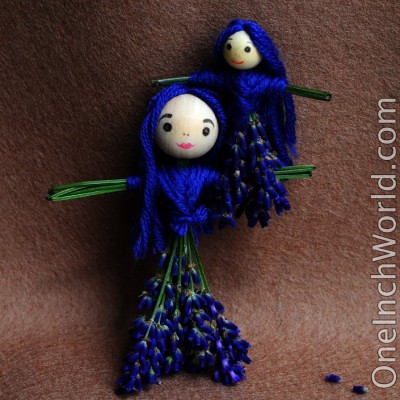 We are visiting my inlaws in Vermont for several weeks, and in addition to an immense forest to play in they have several enormously happy and productive lavender plants which are all spewing flowers. This doll is one of the things I came up with to do with them. She is loosely inspired by Grandma Nenny’s sweet grass dolls.

Things you will need:
Fresh lavender – fresh enough to bend in half without snapping.
A wooden bead, or something round with a hole through it for the head.
String for hair and shirt
Scissors, craft glue and something to draw a face with. 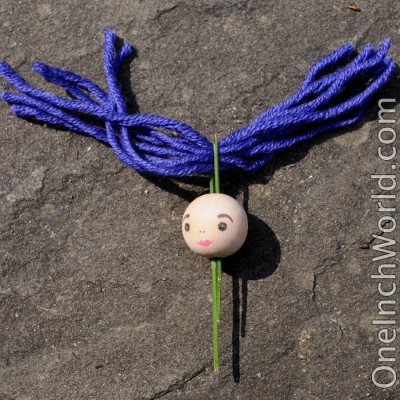 Cut some hair by looping the yarn around your hand about seven times, depending on the size of the head and the hole in it, and cut the loops. Or, you know, don’t. If you have any roving that makes lovely hair. Moss does too. And daisy hats are always in style.

Take a lavender stem, fold it in half around the middle of the hair and thread the stem down through the head. 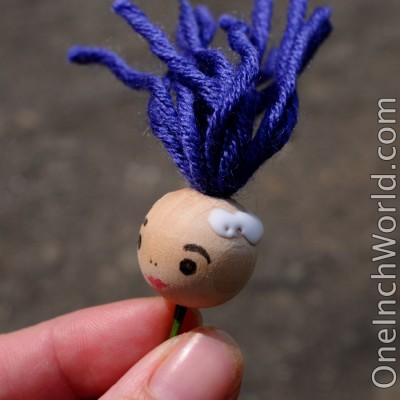 Pull the hair down halfway through the head. If it feels quite stuck then perfect, you’ve used the right amount of hair, nevermind how it covers the fairy’s head. If it feels loose, but you don’t want to add more, you can pull it out again, put a drop of glue down the hole and pull it in again. If it doesn’t fit, you’ll just have to figure something out, probably involving either glue or knots.

Hold the hair up and put glue around the hole in a C, leaving a gap for the face. 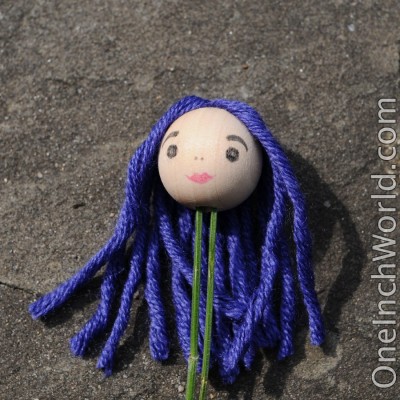 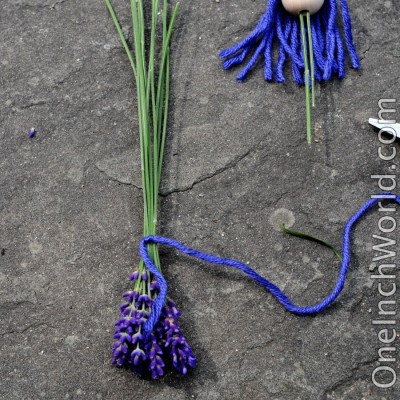 On to the body, the dancing skirt, the home of the heart. Gather your lavender into a bundle, the tips of the blossoms all at the same height. You will want somewhere between 6-12 stems of lavender depending on their size and the size of the doll. This is art, not science!

Tie a knot to hold the bunch together, leaving a two inch tail on one side, and several feet or the whole ball uncut on the other. If you are thinking about proportions, the knot will be just below the finished dolls arms. The dolls I like the best have had the knot just above the top of the highest bud. The one in the picture is a bit high I think. 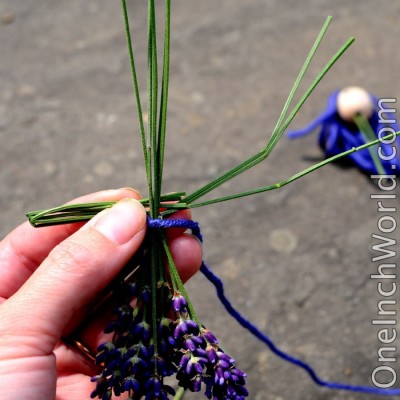 Bend 2-3 stalks straight out to either side just above the knot. Decide on an arm length, then bend the stalks back double and trim them 1/4″ to 1/2″ past the central stalk, so they go behind the sticking up stems and overlap the other arm a bit. 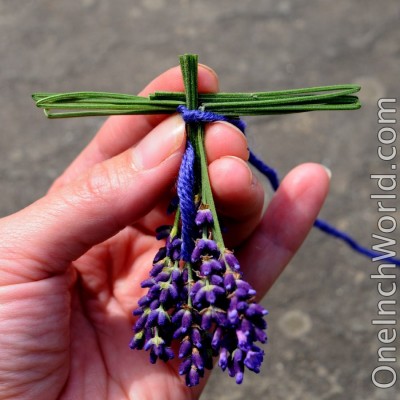 Trim the unbent stalks off at half a head height above the shoulders. So if your head is 1″ in diameter, trim the stalks off about 1/2″. The stalks should give you a little bit of neck, then go into the head and rest against the hair stuffed down the bead shaft. 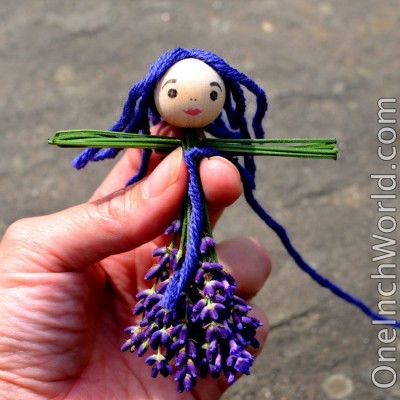 Attach the head next. It’s a bit fiddly. If you like glue put a bit in the bottom of the head. Then thread the lavender stalk coming out of the head down through the knot holding the body bundle of lavender together. Keep pushing the head down and feed all of the neck lavender stalks into the neck hole of the head. Pull the body knot tight if it’s come loose. There’s nothing holding the arms bent at this point except my finger, don’t worry if they are waving wildly around, just gather them up again once the head is on. 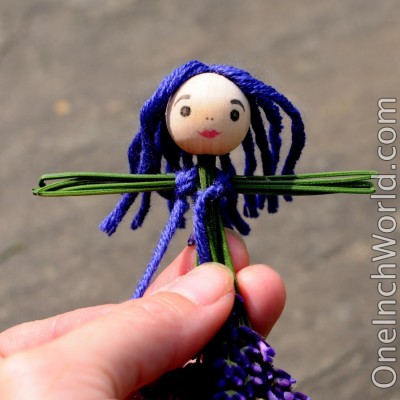 From now to the end tuck the short tail of the yarn down with the skirt, we will want it to finish the knot at the end, so don’t loose it, just keep it out of the way. Tie two half hitches, (does that make it a full hitch?) around each shoulder to hold the arms together. Just tie two on one side, pull the yarn around behind the shoulders and tie the other two for the other arm. 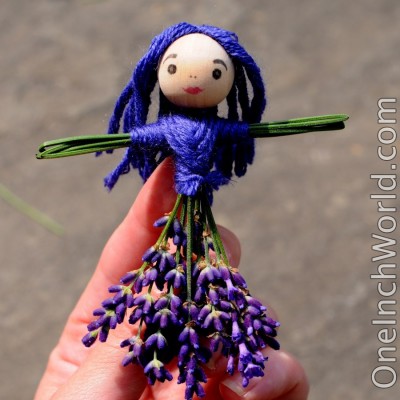 At this point the doll is structurally done, and how you wrap or knot the shirt is a matter of taste. First, before you start wrapping though, give her a kiss for her heart!

For the shirt I like to wrap the yarn from the shoulder down the arm for a sleeve, then wrap back to the shoulder, cross over the body, wrap down the other arm and back up to the shoulder for the other sleeve. But leave her sleeveless if you want. Then for the body I alternate wrapping around the waist/chest once, up over one shoulder, down and around the waist, up over the other shoulder and back to the waist and around. Do that a handful of times and it will create a woven ‘V’ front. When you are done wrapping the body tie a square knot, with the original tail you’ve been saving, over her hip, in the middle, or wherever you like it. Trim the ends.

Then make another one so they can be friends. Once I finished this one I had to make a baby for her. Hugs! And now I’m feeling a strange urge to sew a felt kimono for her…

Why do tutorials always take 10 times longer than you originally think? This really is a pretty simple doll, and exactly how you do the steps doesn’t much matter, so don’t worry, go out and pick some lavender. Or grass, or some weeds. Hmm. Next I will make her a friend ‘clover’! Let me know what happens with you!