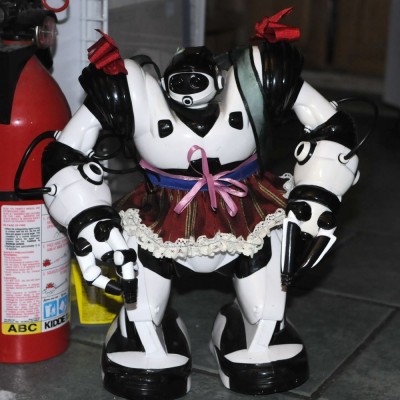 I scored an old Wowwee Robosapien v1 at Goodwill for $20. With no remote.. There were two of them and no remotes, as I was just about to the check out a nice employee said, “Oh, are you buying that?” um, yes? (No, I’m just clutching it to my chest on the way to the checkout…) “Did you get the remote?” No! He thought he had seen it somewhere but then couldn’t find it, and Rebecca, Penelope and I turned the store upside down looking for it with no luck. So in the end we brought white robot home with no remote, and thought maybe we could program a universal remote, or maybe we would have to buy a replacement since it was looking kind of tricky, what was I thinking buying a robot with no remote?? I was thinking hacking… But I have too many projects already… Anyway, I was feeling lucky the next time I went by Goodwill, and thought, maybe they found the remote and stuck it back to the other robot. It could happen. No, there was a *third* Robosapien, in special shiny red, with his remote still packing taped to him. Cue me grabbing the second robot of the week and clutching it to my chest. Score! (For robots they are strangely huggable, I think it’s their narrow waist and curvy war mongering figure. Um.) So now we have two robots and one remote. Perfectly workable! Why did they have three robots in one week? Conspiracy.

Getting back to the point, lost so long ago, White Robot was too scary! So we made it a frilly skirt and some shoulder bows. Scandalously short skirt, but I needed to make sure it wasn’t going to get caught in any of its joints. Now White Robot is less scary, and Penelope will sit in my lap (the safest place) and push the buttons to get Robot to walk around in circles and kick balls. I heart robots! And I need to make sure the younger generation is indoctrinated! Robots! Sushi! だいすきです！ (Did that hiragana finally work?! WordPress after three years I have finally defeated you! Hopefully?) Robots! Woo! Maybe with some paint and plastic surgery we could convert White Robot into a Maid Cafe girl? Should have bought all three of the things!

2 Responses to "Dolling Up Robot"