I got this hare brained idea in my head that it would be fun to do Shrinky Dinks at Penelope’s birthday, which was in the park, which necessitated using a solar oven. So I searched, and I couldn’t immediately find the answer to the question, can you shrink Shrinky Dinks in a solar oven? The answer is yes, yes you can. But we didn’t know that and Rebecca and I approached it as an experiment. I told her ahead of time I didn’t know whether it would work, but we built the oven, and it did! It turns out that the critical temperature is a bit over 200 degrees, which is easily reached with a good solar oven. After our oven was up around 175 and nothing was happening I admit I fell back on research to determine the critical temperature for polystyrene. And then we ignored our oven for a good long time, only going out to readjust it. 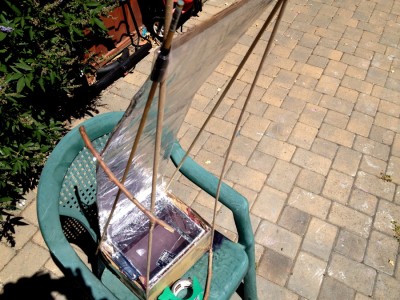 And then it worked! After only about 5 hours. I guess it wasn’t a very good solar oven, we really needed the high early afternoon sun to get it to work. It was a double box construction, but the top was just set on, and the relative box sizes meant the insulation wasn’t very good. I added a ridiculous attempt at a parabolic reflector to the back. When I checked the temperature later the thermometer was broken. Oops. Don’t use a meat thermometer to do a candy/oven thermometer’s job! 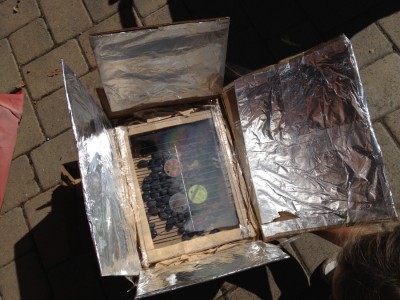 Once we’d proven it was possible we built another better solar oven. It was designed specifically with Shrinky Dinks in mind, rather than big pots of food. So, it is built shallow, only a few inches tall in the oven, and the top doesn’t open (typical for putting in pots), instead it has a narrow flap in the front for putting in trays (better for heat loss than taking off the whole top). Another large difference is I filled the bottom with rocks, black preferably. With a typical solar oven you put in a big mass and wait for it to cook, with a Shrinky Dink oven you need to open the oven repeatedly and put in very low mass items which need to heat quickly or your 3-6 year olds are not impressed. So the rocks act as a thermal capacitor, storing the heat from the sun and then rapidly re-heating the air when the oven door is closed.

Once this oven was up to temperature, 210+ it did a pretty good job shrinking Shrinky Dinks, 3-10 minutes, depending, rather dramatically, on whether the Shrinky Dink was near the back and higher end of the oven. If I was my husband at this point I would spring for a laser thermometer (any excuse for a tool) so that I could more accurately measure the thermal gradient across the oven. 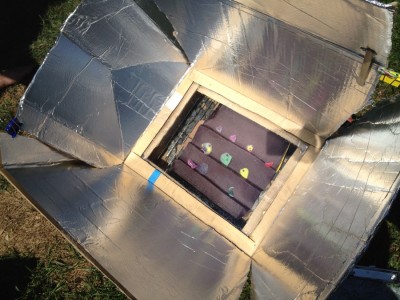 Still, it needed to be rebuilt, I really wanted better reflectors, I’d just taped on the tinfoil for the previous version, and you could see they were perpetually puffed out in the wrong direction, you really want your mirrors to be concave (concentrators) rather than convex (um, spreaders?). So I ripped the reflectors off and cut new ones the morning of the party. This time I did it right and used spray adhesive and smoothly applied the tinfoil. I also curved my mirrors inward. And it didn’t really help. Perhaps the tinfoil just isn’t enough of a reflector in the best wavelengths to contribute significantly over the direct solar energy into the front? Does it get better if you layer the tinfoil? Maybe I could use aluminum flashing? You can see the light level increase when you properly aim the mirror into the box, but it doesn’t seem that it increases significantly. So I don’t think my better mirrors helped as much as I’d hoped. 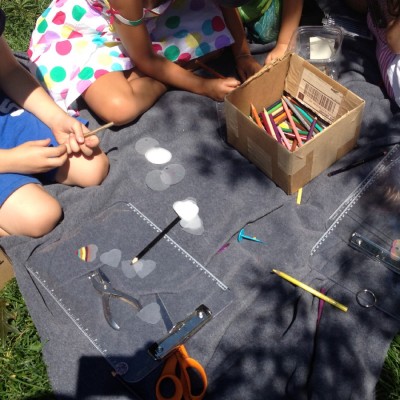 But it worked! We punched shapes out of blank sheets of Shrinky Dinks, and let the kids go to it. 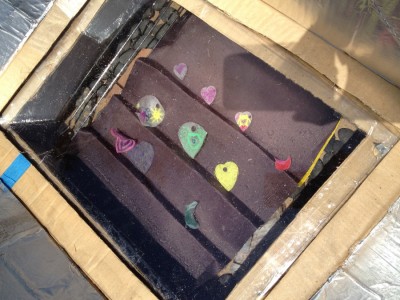 At the end it was barely hot enough, but it did still work. As long as you put the Shrinky Dinks at the hottest part of the oven.

The final modification was to fold the paper tray into ridges to keep the Shrinky Dinks from all sliding to the front (cold part) of the oven. (The solar oven is tipped up to maximize the amount of sunlight shining directly onto the rocks at the base, and as the afternoon wears on that incline angle becomes significant.)

I think it was a great activity, I only burned myself a couple times, and it eliminates the need for generating horrible plastic fumes in your kitchen! Big win. And Rebecca got a lot of science and engineering in the process. “Mom, I want to build a new solar oven every day!” Awesome.

Have you built a solar oven? Any pearls of wisdom about reflectors?

One Response to "Shrinky Dinks in a Solar Oven"