Last winter (I think) we had to deal with mold in the girls floor and wall, and so totally rearranged their room and sleeping arrangements (no more mattress on the floor, as cute as Penelope’s bed cave was.) Thus they had a new bunk bed, and I had many large pieces of cardboard, since it came from IKEA. In February Penelope and I turned several of those pieces into castle walls for her bed. 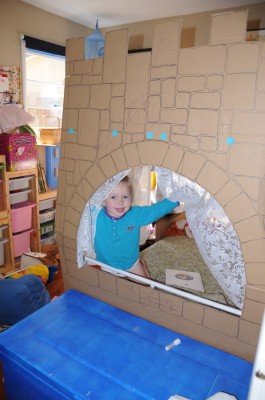 I drew bricks and a window and cut crenulations. We cut up some old curtains and hung them with some Make-Do. 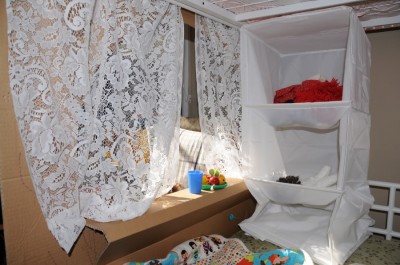 On the long side of the bed we put up another wall unit, and you can, sort of, see how we only cut the window along the arch, not the bottom edge, and then bent the flap down to create a window ledge pinned in place with more Make-Do. Since it has a triangular cross section it is marginally sturdy. 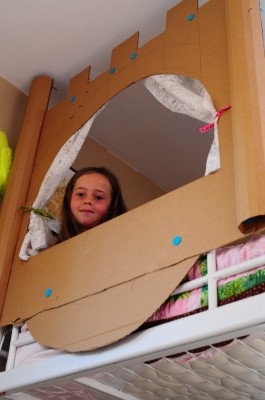 Princess Rebecca complained that it wasn’t fair that Penelope got to sleep in a castle, and she didn’t! For a while I wasn’t sure what to do about that, since I thought if I hung the wall from the ceiling one of her friends would lean on it, pull the whole thing down and fall out of her bed. Not cool. But the second wall on Penelope’s bed turned out to be too much in the way anyway, so we took it down. Eventually I figured out I could fold the window ledge around the rails on Rebecca’s bed if I cut it down a little, and that made the wall stand up, but be floppy enough that even a 6 year old is unlikely to think it will actually support their weight. I had to add some vertical supports to get it to stand up, since it was originally designed to hang. But I think the columns, assembled with LOTS of glue gun glue combined with Make-Do, look pretty cool. They are, to my chagrin, still not drawn with castle blocks though. And given my perpetually increasing project list probably never will be.